TheWorthing bus rally 2019 was a splendid. Worthing always looks lovely, but when you add antique buses and a big wheel the day promises to be perfect. On the day, however, it was overcast – and I was planning to take some trichromic pictures of the buses and the wheel. Unfortunately I used a new (to me) Olympus OM 30 for the trichromic which had a massive light leak. Naturally I only discovered the leak when I emerged from the dark room.

This summer we took our old van and our middle aged dogs on a road trip to meet up with my son and his partner – and to meet her folks.

Our van likes to do about 100 miles a day – so a return trip from Worthing to Beamish took us 10 days. The weather was pretty wet, but we weren’t downhearted and the van behaved faultlessly – the van, Hildegarde, has now gone off for her annual make over so while she is away having her welds welded we can look at these pictures and make plans for next year.

All the photos were shot using an Olympus OM30 and fuji colour negative film – all developed at home in the sink!

Just before the nights began to draw in we took advantage of the late summer bank holiday to take out van and dogs to Chiddingly. The weather was great, the pub was ideal and I captured a few pictures using the Olympus OM 30 – and a roll of Ilford FP4. I also took the opportunity to shoot three new Trichromic images – three black and white images working together to make a colour image – just like technicolor!

Click here to see our trip to the pub

Back in May we went to Santorini and experienced the early spring rain and chill – but after the rain there inevitably follows some sun – all on Fujichrome 200 and shot with the Olympus OM30.

I took my Mamiya C3 camera with some Fujichrome slide film because I wanted to capture the moment of the 100th anniversary of the end of the first world war. The space around the war memorial by Worthing town hall was crammed with people, it was a touching moment as we remembered the fallen – and were reminded of the huge sacrifices the world made during that conflict.

Santorini in May 2019 – a present from our children to celebrate my wife’s birthday – I came along too just to make sure there were no problems with the language. Anyway, the idea that there is an off season on Santorini is probably a bit misleading – it’s a very popular Greek island full of history and the historic and imminent danger of volcanic destruction.

The island is probably most famous for the beautiful village of Oia – see below – and the amazing achealogical remains at Akrotiri. Of course the weather is always brilliant, whenever it’s not raining pumice. 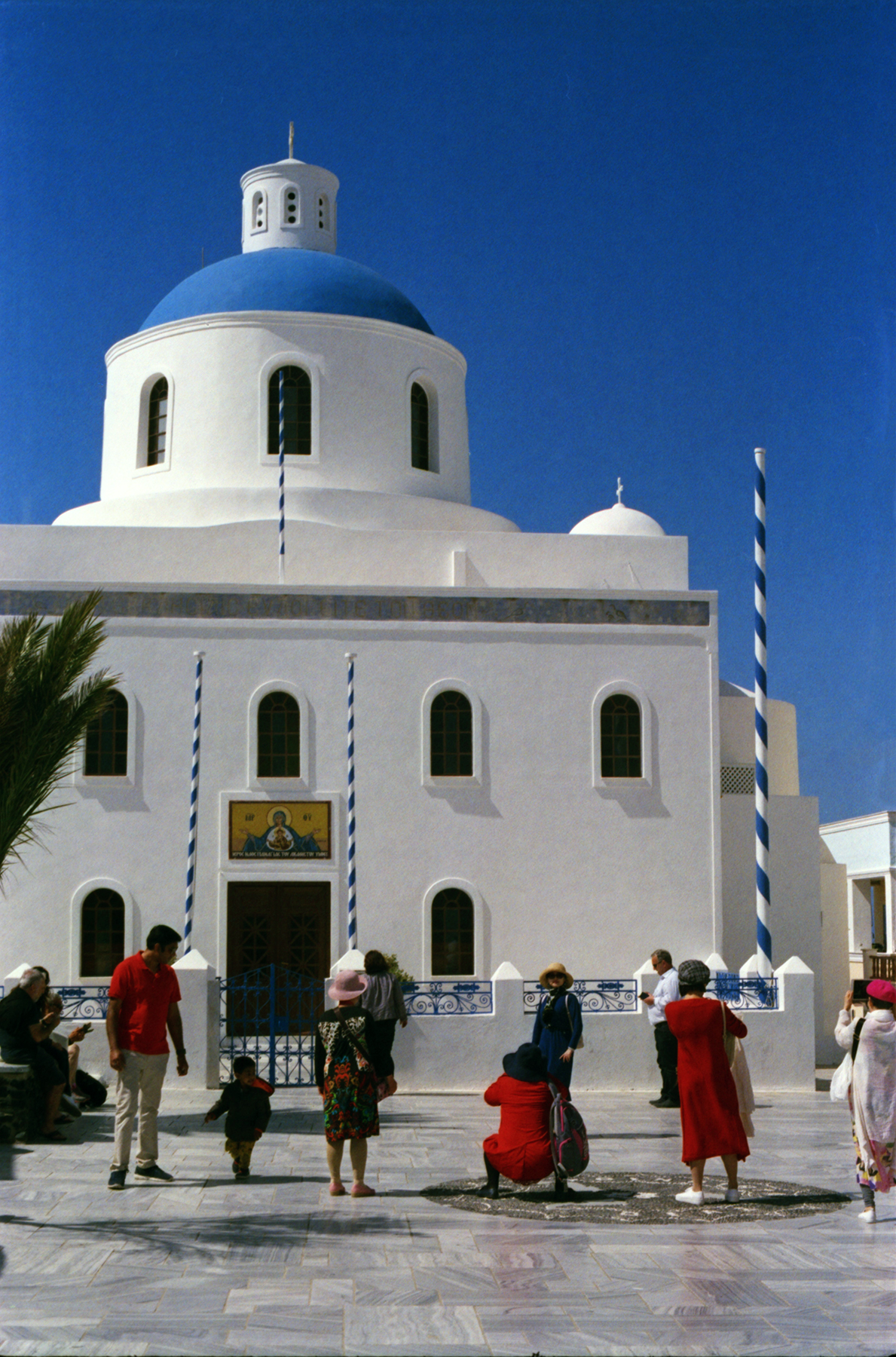 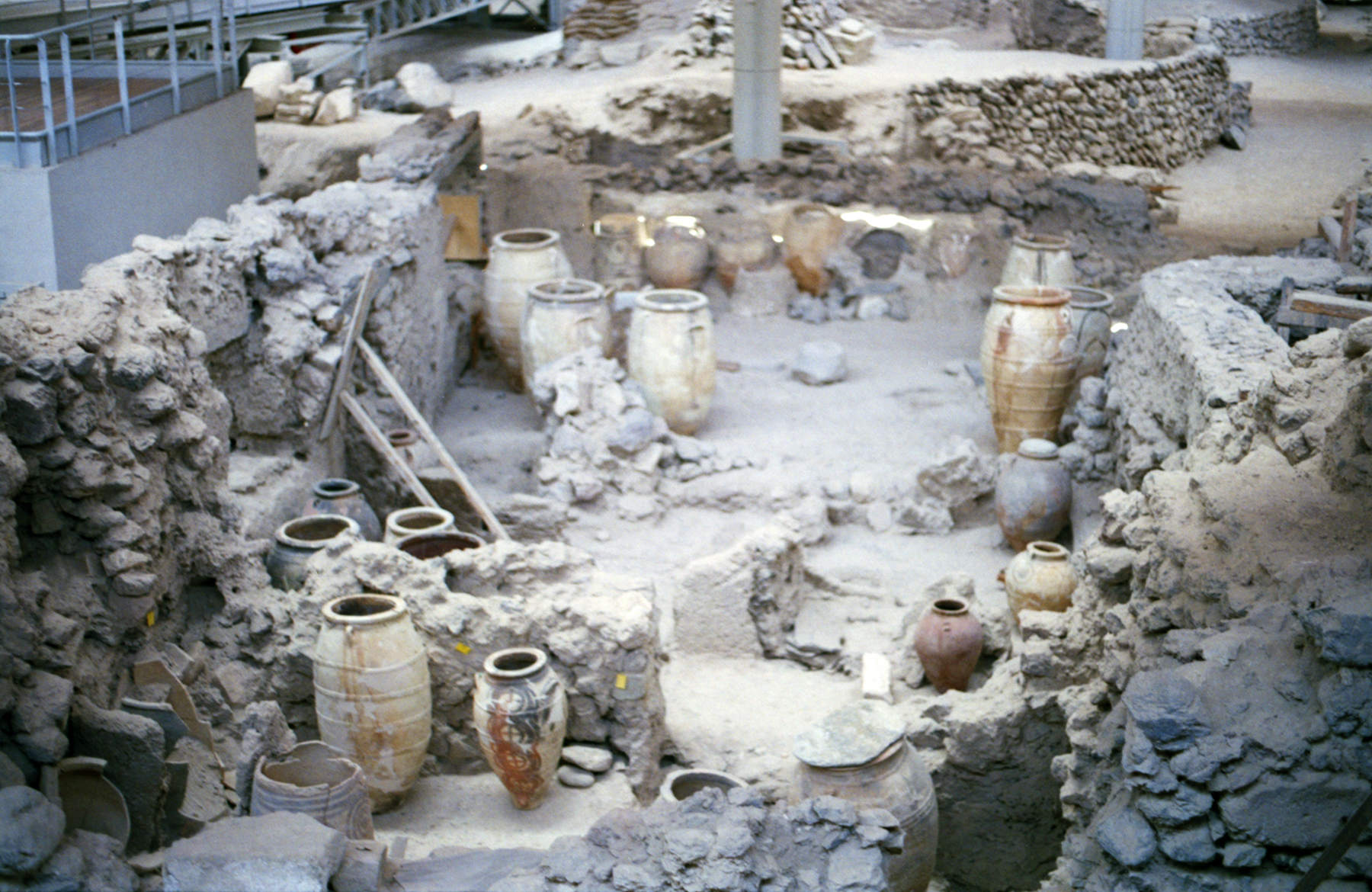 Back in April 2019 we were asked to help with a promotion for the excellent Here and Now magazine – a monthly free magazine for Worthing – check out the photo of the Editor, Frances, inside the front page – it’s one of mine!

Classic educational film strips are shot in ‘half-frame’ 35mm. Actually the way the images are set out in the film is just like 35mm movie film.

Above is a section of a film strip called “Life in the Summer”. I am scanning these old strips for posting on the web in due course. I thought it would be fun to buy a half-frame 35mm camera and see what it could do.

The camera I got was an Olympus Pen EE2. EE stands for ‘Electric Eye’. It has an selenium exposure around the fixed focus lens. The meter stops you taking a picture if there is low light ; it makes a red flag appear in the view finder.

Such a nice piece of equipment it doesn’t even need a battery.

Actually, I had a false start with this. I got hold of a 45 year old Olympus Pen EE from Ebay which had a faulty exposure meter – it did take some pictures but the exposures were all over the place. So I found a slightly younger camera, the EE2, on Ebay and imported it from The Netherlands. It’s a beauty – and here is a picture of it taken with my pinhole camera.

Is this too meta? Cameras taking with other cameras? This post is about half frame 35mm – we’ll cover off educational film strips and pinhole cameras another time!

Because half frame cameras take half size negatives you get twice as many pictures per roll of film. That’s 72 pictures for a 36 shot roll. No wonder I was shooting off images like someone using a mobile phone. Here are a couple of images from the gallery.

Whilst digging through my hard drive today I came across some images of the Berlin wall I took last year during a visit with my daughter. There are some lovely colourful images in this set – here is a sample.

Here are some pictures taken on new year’s day 2019. It’s the Sompting Village Morris dancers bringing in the new year at the Richard Cobden here in sunny Worthing.

This site is a home for the photographic work of Steve Wallace, an amateur photographer living in Worthing, West Sussex.